The Islands of Clew Bay as seen from the Reek

When Saint Patrick first climbed the Reek around 441 a.d., it was known as Mons Egli, Croachan Aigli or Cruachan Aigli. It was not until 1350, hundreds of years after his death, that it became known as Cruaich Patric. It was the 16th century before the anglicised name “Croagh Patrick” came to pass.

This stunning quartzite mountain on the edge of Europe has a geological history dating back 750 million years. Yet its social history is far less obvious. Fact and myth have become curiously intertwined. The recent discovery of a ‘rock art’ tablet at Boheh, east of the Reek, has been dated back to 5,800 b.c., which would put its creation in the Mesolithic or middle stone age. These would have been the first people to come to Ireland. Britain and Ireland were still joined to the continent, by land bridges. The sea level was lower, because much of the earth’s water was still frozen solid on higher ground.

The discovery of the ‘rolling sun’ phenomenon by the late historian Gerry Bracken suggests that even then, the natives venerated the Reek as a mountain of special significance. Bracken determined that on April 18th and August 24th, when viewed from the Boheh Stone, the setting sun appears to ‘roll down’ the western side of the mountain. Perhaps coincidentally, when considered along with the winter solstice on December 21st, this divides the year into three equal parts. However, it is considered more likely to signal the beginning and end of the growing season. The Boheh stone, about six kilometres east of the mountain, is significantly decorated with “cup and ring” motifs.

The Bronze Age did not begin in Ireland until around 2000 b.c., and new settlers around the Reek were probably first attracted by the bright color of gold. The area around the Croagh Patrick must have been of particular interest, for the vein of gold that runs along this part of the west of Ireland suggests that the southern side of Clew Bay truly merits the name ‘Gold Coast’. Even the local Owenwee River – translated Abhainn Buí or Yellow River – suggested that the presence of gold was commonly known. These people built ceremonial circles of stone in the area, like the stone circle at the magical Brackloon Wood on the slopes of Croagh Patrick.

A mix of folklore and legend tells us that a group called the Fir Bolgs arrived in the area from Greece around 1850 b.c., but were defeated by another invader, the Tuatha Dé Danann, who were to become the main pagan gods of Ireland by representing particular features of life and nature. One of these gods was called Lugh, and pagans celebrated the harvest with the festival of Lughnasa (now encompassed in the Irish word for ‘August’).

Around 1500 b.c., the Milesians arrived – apparently from the Ionian Sea and the Middle East, although some would argue that they came from France. Knox, in his ‘History of County Mayo’, notes that “old chroniclers allege, that years after the Milesians came to Ireland, there were fierce battles fought about Cruáchan Aigle, Cleire (Clare Island) and Inisheemow (the other islands of Clew Bay), and that the chief races of ancient Ireland were brought together at Murrisk – De Danaans, Firbolgs and Milesians inter-married and produced a new race, the tribes as such being actually submerged.”

The Celts arrived around 600 b.c. By that time, it is clear that their predecessors had already established a thorough understanding of astronomy, and that the Reek was an important landmark in ancient times. Murphy and Moore, in their book entitled “Island of the Setting Sun: In Search of Ireland’s Ancient Astronomers” are convinced that the Reek is at the western end of an ‘Equinox Line’ that stretches 217 kilometres across Ireland from Inbher Colpa (now Drogheda), where Amergin, leader of the Milesians landed.

Tracing this straight line across the country – the authors noted that sunset occurs directly over the Hill of Slane – where Patrick lit the Easter fire – at the time of the full moon (now the indicator of Easter in the Christian calendar) a few days after the Vernal Equinox, and continues through the ancient dwelling of the High Kings of Connacht at Rathcroghan (or Cruachan Aí) and west to Croagh Patrick. Murphy and Moore go on to state that this line crosses the summit of Croagh Patrick “with breathtaking accuracy”. They also point out that the relatively unknown site of Rathcroghan is one of the largest archaeological complexes in the world, with over two hundred monuments in a ten-mile radius.

The theory is that Saint Patrick deliberately followed this line across the country to Croagh Patrick. The authors state “At the moment of the equinox sunset, we were looking in the direction of the Hill of Slane and also Croagh Patrick, following a sacred pathway to the stars. This is breathtaking. It connects some of the most significant places associated with Ireland’s national Saint, and at the same time reflects an ancient cosmology which predates Patrick by three and a half millennia. There seems no limit to what the ancients were capable of. We are amazed.”

Harry Hughes, author of “Croagh Patrick – A Place of Pilgrimage” points out that the equinox line also passes along Patrick’s Causeway (otherwise known as the Tochar Padraig) and the Rock of Boheh. According to Murphy and Moore “evidence is emerging that significant archaeological sites dating from deep in prehistory are linked – not just through mythology, archaeology and cosmology – but through an arrangement of complex, and, in some cases, astonishing alignments.”

A rampart once existed around the summit of the Reek, with several huts located on the northwest side. The location of these huts is still visible today. The earliest oratory on the summit has been dated between 430 to 890 AD. It is likely that the Reek had a succession of these oratories.

Excavations on the top of Croagh Patrick determined that it had once functioned as a hill fort, with several dwellings on the summit. Local archaeologist Gerry Walsh’s team also discovered the outlines of at least thirty hut sites. Further excavations also uncovered the foundations of an early church, dating as far back as the fifth century, when Saint Patrick was alive.

Lugnademon – the hollow of the serpents, located on the northeast side of the mountain – was formed during the ice age. The stories associated with this impressive area – it being the legendary Armageddon of all snakes in Ireland – are more symbolic of Patrick’s desire to banish paganism from the land. If this mountain was truly his focal point for such symbolism, then Croagh Patrick must have been one of the foremost sacred ritual places in all of Ireland.

The Reek was clearly of great significance in ancient Ireland. There is no doubt about its important place as a pilgrimage mountain since the stories concerning the life of Saint Patrick emerged long after his death. Yet despite the mysteries surrounding pre-Christian sites in Ireland, we are fortunate that for whatever reason, many of these still remain to silently tell of the mountain’s vaunted place in prehistoric times.

Michael Cusack is the author of “Croagh Patrick and the Islands of Clew Bay – A Guide to the Edge of Europe”.

Check out the bestselling book on Croagh Patrick & Clew Bay! 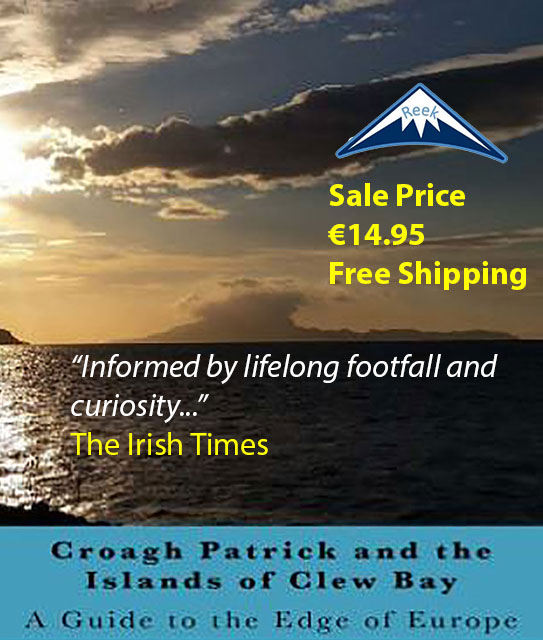 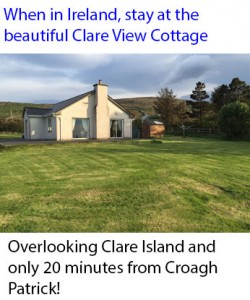